When did you join the club?

I joined the Bristol Kettlebell Club back in April 2011.

What attracted you to it?

I had been putting on weight since my bowel surgery for Crohns Disease in 2009.  I was going to the gym but just not getting the results I wanted, so when I saw an advert in the local paper for Bristol Kettlebell Club I thought I had nothing to lose, other than a bit of weight!  The 4 week beginners Bootcamp was a huge appeal to me.  I don’t think I would have even entertained trying Kettlebells without the beginners course. 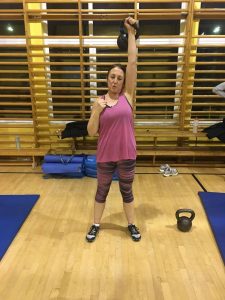 Did you have reservations or concerns about joining?

I was worried about trying something completely new and out of my comfort zone, with people I didn’t know, but knew that what I needed was something different.

And what was the reality of that?

Trying something new was so refreshing, I had absolutely nothing to be concerned about.  No more tedious, same old sessions in the gym, each Kettlebell class was also a little different to the previous, which kept things interesting, and the people I didn’t know soon became friends.

What do you like most about being a part of the club?

I’ve been training with the club for the best part of six years, and have made some great friends.  All the members are very supportive of each other, and very welcoming to newcomers.  We train hard, but have fun too! 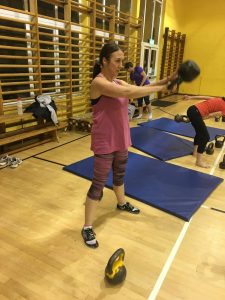 What specific benefits have you received?

The instructors at the club are experts in their field and Pete has also been able to advise me on nutrition, which has been a big part of the improvements to my physique, as well as helping to relieve some of the symptoms I experience with Crohns Disease.  I can honestly say, that at the age of 46, I’m stronger, leaner and fitter than I have ever been.  I remember, during the 4 week beginners Bootcamp not being able to press a 6kg bell, I’m now able to press 14kg bell with relative ease.

How has being a part of the club impacted your life?

What do you hope to achieve in the future, what are you working on?

I’m hoping to get stronger still without losing technique, so will continue to work hard to achieve that.  With the support of the instructors I know that is a realistic goal.

What would you say to someone who is thinking about joining?

If you want to lose weight, get leaner, fitter and make some great friends then what are you waiting for?