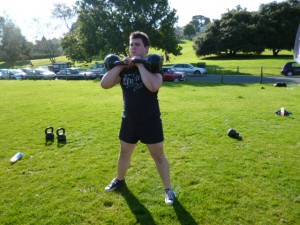 When did you get into kettlebell training?

I started kettlebell training at the beginning of June 2012 in one of Pete’s introduction sessions.

What attracted you to kettlebell  training?

I dislocated my knee playing rugby in October 2010, had reconstructive surgery in January 2011 and dramatically went from a fairly active life style to no activity whatsoever. As a result I put on nearly 3 stone.

I was initially very limited as to what I could and could not do exercise-wise. I was attending physiotherapy sessions to rehabilitate my knee and they dictated my activity level (and when I say limited, I mean outside the confines of the physio room, walking for long periods of time was difficult). Eventually I was allowed to go back to the gym and begin light exercise again, but at this point I was massively overweight, unfit and my desire for sport had all but ceased. I was very much stuck in a rut and unhappy.

My physiotherapy ended and I was told that I really needed to improve my core strength, quad strength (particularly VMO) and the strength in my glutes to better support and stabilise my knee.

I’d heard about kettlebell training from various articles in magazines and websites like Mens Health and LiveStrong.com etc and the benefits it could have on fitness and strength as well as strengthening what was then a foreign phrase to me; the, “posterior chain”.

I took to the internet in search of a kettlebell supplier in Bristol and the first result was Pete’s website (and it’s a good thing this came up first too). I got in touch and he replied to me within the hour which automatically gave me the feeling, this guy really cares about what he does.

After answering a few of my questions I signed up to an introduction session and I haven’t looked back. 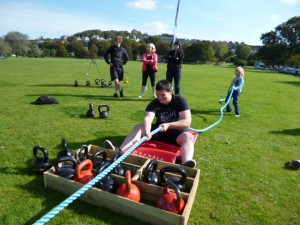 Some say it’s really tough, is it?

It’s unlike any exercise you’ve done before. Sessions are intense but worked into a short amount of time.

You really can make it as hard or as easy as you like, however I try to do one session per week using heavy kettlebells and the other sessions using the next size down.

Importantly there is no performance pressure and the other people that go to the groups are very encouraging and very friendly, there is certainly no ‘who can lift the bigger weight’ mentality that you might find at some gyms.

Pete’s method of teaching is amazing in that, he knows when to push you and when not to. He has a real grasp for where people are fitness and strength wise and is very good at getting the best out of you, even when you feel you can’t do that last rep.

Since joining the club I’ve never had one class that is the same, which I think adds to the fun of training – you never know what’s around the corner. Yes, I said FUN and TRAINING in the same sentence.

What other types of fitness have/do you enjoy?

Before my knee op I’d always been relatively active, partaking in Karate when I was younger, playing squash to county standard, rugby, golf, gym, hiking etc. 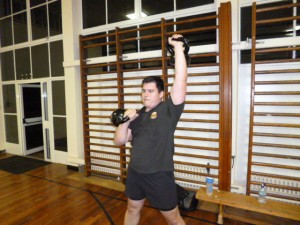 My current addiction to kettlebells however is how I’m spending most of my time when it comes to fitness.

There is a lot of hype surrounding kettlebell training, what kind of results have you seen?

Where to start? In a short time the results have been incredible.

I suppose the biggest thing which people always want to know about is weight loss/fat loss. Since joining I’ve dropped a trouser size from 40” to 38” and gone from 19.7 stone to 17.9 stone. I’ve slimmed down pretty much everywhere from my face, butt and midriff, to my legs, arms and chest becoming more defined.

Other noticeable differences have been big improvements to my flexibility, core strength, glute strength and stamina.

Aside from the physical results, I’m much happier as a person, my confidence has improved and I’m enjoying the comments I’m getting from other people about how much weight I’ve lost.

The nutrition plan that Pete provides when starting has changed my outlook on food. I no longer drink anything with caffeine, I avoid processed food where possible and by a process of elimination I have discovered I am actually intolerant to certain food groups. I’m now sleeping better, I have more energy, my skin has improved and I’m more alert (amongst other things).

I’ve made some great new friends and have already been out to one of the social events with the club which was good fun.

The feeling you get at the end of a session and the next morning is quite remarkable.

I can’t say enough good things about Pete, his knowledge of training and nutrition is impeccable, he is approachable yet professional and a good motivator. 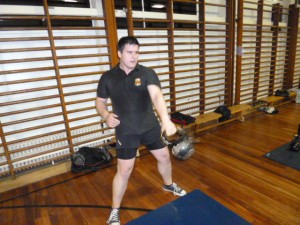 What size kettlebells do you work with?

It really depends on the session. I started off using a 12kg for everything. Currently for conditioning I use the 16kg bell but I’m pushing at the moment to up that to the 20kg bell.

What are your future goals within kettlebell training?

I want to continue to increase the weight I’m using, particularly for the conditioning I’d like to be able to do complexes with a 24kg bell.

I’m looking forward to being able to compete in the SSST fitness testing and increasing my core strength to be able to hold planks for up to 5 minutes.

I also want to continue with the weight loss, my next goal is to hit 16st by January 2013.

To be able to pistol squat on both legs would also be nice! 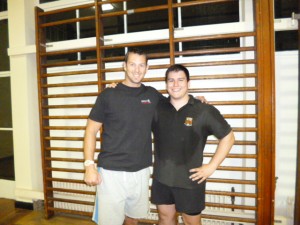 I think its fair to say Liam has experienced all of the benefits of this type of activity, increased flexibility, confidence, energy, core strength, stamina, weight loss, the list goes on. The nutritional changes I suggested for him have also helped with this. Liam took a conservative approach to training and really focused on technique before increasing the weights. I am really glad he took that advice from me, too many trainees want to push the heavy weight to soon and train their ego rather than the body, they can end up injured or moving in the wrong pattern. With his technique dialed in he is now starting to push it and this was evident when he won our in house strength contest a couple of weeks ago. Liam has picked some great goals to work towards, the strength is there so its time to work on conditioning. I have been coaching him to snatch the kettlebell and its going well, the fitness test is 7 weeks away so it will be interesting to see what he can do! Liam, if there’s anything else I can do for you, you know where I am! Congratulations on all you’ve achieved so far.